The Fans of the Countess

Since I am receiving more art in recent times, I've decided to add a gallery of art about Elizabeth. The gallery is here.

William Max Miller created the portrait of Erzsébet below. It is not based on the traditional portraits or 19th century romantic renderings. It is a new re-thinking, with red hair instead of black. You can visit Miller's artwork at http://anubis4_2000.tripod.com/Nightmares.htm. He writes, "All of my artwork focuses on the strange, the macabre, and the bizarre. Naturally, Elizabeth Bathory, with her allegedly vampiric/homicidal habits, fits into these colorful categories! I chose not to use her famous portrait and its several variants as a model, but turned toward my own inner vision of this sinister woman. I depicted her engulfed by the flames of her infernal passion for blood and eternal youthfulness." 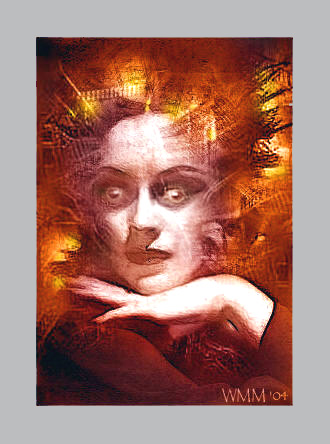 There's also this piece that came in from an Erzsébet enthusiast calling himself Dead Cowboy. He created a pendant for his girlfriend (yes, it was enthusiastically received). Dead Cowbody is also a writer with a great script for a modern-day tale of Erzsébet and Vlad Dracula, and is on the hunt for a professional comic book illustrator. Drop me a note if you're an illustrator willing to collaborate with him. 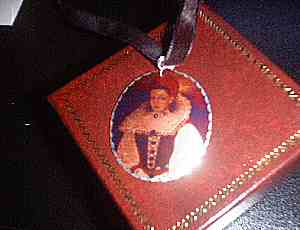 This website has received millions of hits since it opened in 1996, and I have received thousands of emails.

The Erzsébet fans come from every country and write in every language. Some letters I can read, and some I can muddle through with the help of dictionaries, while others are entirely opaque.

Many ask me the obvious questions that are already answered on the website: "Are you related to her?" "Can you send me pictures?" "Will you do my research for me?" "How do I get to her castle?" One out of three asks, "Did you ever hear Cradle of Filth?" (Yes I have! Please don't ask me again!)

Others have done research of the Countess themselves, and are fascinated--as I have been--with the character of Erzsébet. Lisbet has studied the portraits for clues to her character. Sarah's artwork is influenced by what she learns. Lorraine uses the Countess as a sort of life-guide. Betty is looking for medical connections to help her family with their afflictions. In 'real life', part-time Erzsébet biographer Shyla is a professional graphics designer. Charlotte (who 'personified' the Countess for five years) is a forestry student, and Raffaella is an extraordinary electroacoustic composer who has written works with Erzsébet in mind.

Some visitors, especially the vampire expert Elizabeth Miller, help me to correct my facts, and those with Slovak heritage upbraid me for not telling their story. 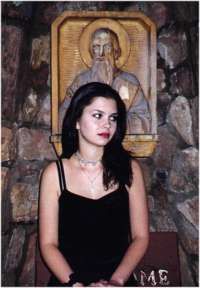 Others submit stories or novels. For some reason, the Blood Countess is a special favorite in South America, where she has been the subject of stories both famous and little known. Among the former is Alejandra Pizarnik's classic La condesa sangrienta and the latter include the short novels published on this site, written by Carlos Carrillo of Peru and Carlos Pérez of Argentina (also Pizarnik's home until her death in 1972).

Court TV and MSN have drawn from the site. After finding my stories, London Weekend Television produced a special for the Discovery Channel, using an interview with me done at Cséjthe Castle. Publishers on three continents has reprinted photos, and a French vampire magazine asked me for a story.

Other site visitors ask permission to use photos and texts, and some, like Mara and Eurydice, send me their photos. Several, such as Syn and ElricWarrior, warn me who is stealing my photos or my bandwidth without permission.

Yes, too many call themselves "Elizabeth Bathory," even if their real names are Amanda or Brandy, and the occasional genuine Erzsébet Bathory is hard to spot, especially under the hailstorm of 'genealogical research' requests. 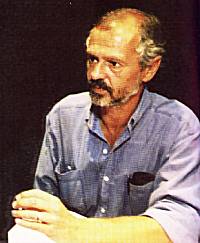 Though men are fascinated by her story, it's the young women who profess love for the Countess. Never mind that, were this 1600, they would likely be despised by the haughty noblewoman who negotiated with national leaders, spoke three languages, and commanded endless servants and massive wealth. Never mind that she was not herself a free spirit, but rather royalty constrained by politics, motherhood, and the balance of multiple religious demands. Never mind that in her single surviving portrait, she is the epitome of convention, with hardly a glimmer of contumacy. And never mind that she mercilessly tortured and murdered hundreds of young women just like them. They love her still.

After reading these thousands of emails, I realize that these young women love Erzsébet, are obsessed with her, in ways I cannot, will never, fathom. To me, she is a horrific ancestor, but one worthy of telling the story in opera.

Here is what they say: